Multimode and single-mode optical fiber cables are two different cable types in optical networking. Using a larger core size, multimode fiber cable allows multiple light signals to be transmitted in a single fiber over short distances. Multimode fiber systems offer flexible, reliable and cost effective cabling solutions for local area networks (LANs), storage area networks (SANs), central offices and data centers. Unlike the complex classifications of single-mode fiber, multimode fiber is usually divided into four types of OM1, OM2, OM3, OM4. “OM” is abbreviated for optical multimode, and it is specified by the ISO/IEC 11801 international standard. Of course, these four types of multimode fiber have different specifications (as shown in the following table). The article will compare these four kinds of fibers from the side of core size, bandwidth, data rate, distance, color and optical source in details. 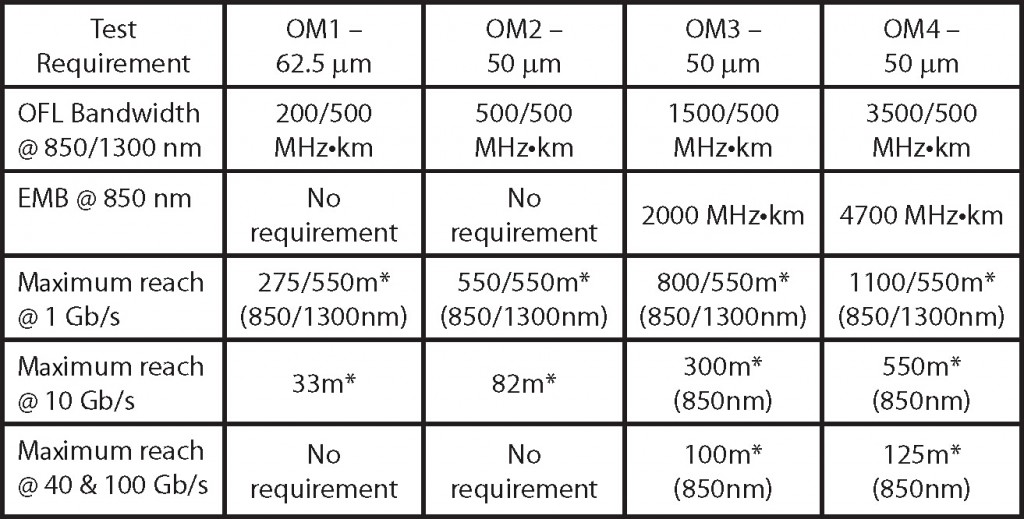 Multimode fiber is provided with the core diameter from 50 &micro;m to 100 &micro;m. Apart from OM1 with a core size of 62.5 &micro;m, other three types are all using the 50 &micro;m. The thick core size makes them able to carry different light waves along numerous paths without modal dispersion limitation. Nevertheless, in the long cable distance, multiple paths of light can cause signal distortion at the receiving end, resulting in an unclear and incomplete data transmission. And this is why all the types of multimode fiber can only be used for short distance.

Bandwidth is the bit-rate of available or consumed information capacity expressed typically in metric multiples of bits per second. The higher bandwidth is, the faster transmission speed can be. According to overfilled launch (OFL) and effective modal bandwidth (EMB) measurements, OM1 and OM2 can only support OFL, but OM3 and OM4 are able to support both measurements. At the wavelengths of 850/1300 nm under OFL, the respective bandwidth of OM1, OM2, OM3, OM4 is 200/500 MHz*km, 500/500 MHz*km, 1500/500 MHz*km and 3500/500 MHz*km. And at the wavelength of 850 nm under EMB, the bandwidth of OM3 is 2000 MHz*km and OM4 even reaches 4700 MHz*km.

Data rate is a technical term that describes how quickly information can be exchanged between electronic devices. With a higher data rate, the transmission can be more effective. OM1 and OM2 support the Ethernet standards from 100BASE to 10GBASE with a minimum data rate of 100 Mbps and a maximum data rate of 10 Gbps. Compare with OM1 and OM2, OM3 and OM4 are enhanced to support much higher data rates of 40 Gbps and 100Gbps in 40G and 100G Ethernet.

Multimode fiber is typically used for short distance transmission. But the maximum reaches are varied in different multimode fiber types. Also, on account of different data rates, the transmitting distances are different. However, the common feature is that OM1 always supports the shortest distance yet OM4 supports the longest. For instance, based on the same data rate of 10 Gbps, the maximum reach of OM1 is 33 m, OM2 is 82 m, OM3 is 300 m and OM4 is 550 m. Thus, if a medium-sized transmission is required, OM3 and OM4 are the best choices.

The outer jacket can also be a method to distinguish OM1, OM2 from OM3, OM4. The common jacket color of OM1 and OM2 is orange, and OM3, OM4 are in aqua. In addition, OM1 and OM2 are using a light-emitting diodes (LEDs) optical source but OM3 and OM4 adopt the vertical-cavity surface-emitting laser (VCSELs) optical source.

OM1 and OM2 are widely employed for short-haul networks, local area networks (LANs) and private networks. OM3 is applied to a larger private networks. Different from the previous multimode types, OM4 is more advanced to be used for high-speed networks in data centers, financial centers and corporate campuses. The video below demonstrated the applications and differences between OM1, OM2, OM3, OM4 and OM5 multimode fibers.

It is very important to choose the right fiber type for your application. Future-proofing network design is crucial for network planning, but there is often a cost for that speed. With a higher performance, OM3 and OM4 are definitely more expensive than OM1 and OM2. So plan well and spend wisely.