What is the difference between Cat6 and Cat6a and Cat7 cables?

What is the difference between Cat6 and Cat6a and Cat7 cables? Should I choose Cat7, Cat6 or Cat6a for my 10G Ethernet cable?

The need for high bandwidth continues to increase. Legacy Cat5 and Cat5e patch cords no longer meet 10Gbps, which requires the new twisted pair copper cabling specification. For the high-speed application of 10GBASE-T, Ethernet cables with higher bandwidths such as Cat6, Cat6a, and Cat7 have been introduced. What is the difference between Cat6 and Cat6a and Cat7 cables? Should I choose Cat7, Cat6 or Cat6a for my 10G Ethernet cable?

Introduction to Cat6 vs Cat6a vs Cat7 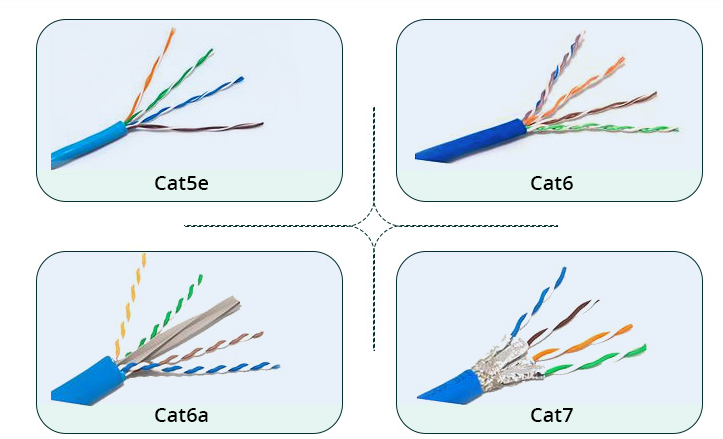 • Cat6a is a 10 Gb copper Ethernet proposal that complies with the Cat6 standard. Cat6a cables are designed to support frequencies up to 500 MHz, double that of Cat6, and can support up to 100 meters at 10Gbps.

Compared to Cat6, Ca6a has a stronger sheath, which reduces alien crosstalk and improves signal-to-noise ratio. In addition, the use of Cat6 network cables at 10Gbps cannot take advantage of the power-saving short-distance mode. Short-Range Mode can reduce power consumption by 1W per port when using Cat6 at 30 meters or less. So 10GBASE-T cable Cat6 is not cost-effective and environmentally friendly for 10GBASE-T applications. More importantly, Cat6 cable cannot dissipate heat like Cat6a 10GBASE-T cable because Cat6 10GBASE-T cable has smaller diameter conductors.

10GbE Cat6 cabling does cost less than 10GbE Cat6a cabling. However, assuming you're betting on running 10Gbps over Cat6 cabling, you'll have to replace all Cat6 components when it doesn't work, which will be much more expensive than going straight to Cat6a cabling.

In conclusion, 10GBASE-T cable Cat6 vs Cat6a, the former is not recommended for some 10GBASE-T applications due to its limitations. The minimum cabling class deployed in a 10GBASE-T network should be Cat6a cabling.

In fact, the Cat7 standard was approved earlier than Cat6a to support 10Gbps over 100m. A major advantage of Cat7 cable is that it shields each of the four pairs and the entire pair, making it better noise immunity, but also less flexible and manageable. Therefore, 10GbE on Cat7 cable is less difficult to install than Cat6a cable, which is also much more expensive.

In the lab, Cat7 cable speeds have shown the potential to reach data rates of 40Gbps, 50Gbps, and 100Gbps. But the Cat7 cable itself only provides the power and speed for the type of device and Internet it is used on. If you just switch to a faster cable and keep using a slower device, your internet speed won't increase. That is, if you use a 10GBASE-T copper switch to connect your 10G server, you will only get at most 10G whether or not you replace Cat6a with Cat7.

The connector type for Cat7 is slightly different from the first two - RJ45 is compatible with GG45 connectors. Although Cat7 cables can also use RJ45 connectors, it is easier to terminate cables with thick jackets to narrow jacks in the field. Therefore, you may need to hire a professional electrician or spend a long time terminating the RJ45 jack to the Cat7 cable yourself.

So, Cat7 or Cat6a, which one to choose? Most people think that Cat7 provides much more bandwidth than they need, so choose Cat6a or Cat6. However, as more and more homes add other technologies to their Ethernet cables, such as automation, closed-circuit security devices and personal servers, and smart home technology, Cat7 may be a better fit. For this reason, those who anticipate increased bandwidth usage might opt for the faster cable Cat7, while those who don't update their technology frequently might opt for Cat6a, which is perfectly adequate.

How to decide which structured cabling system to use? Are you installing Cat6, Cat6a or Cat7? Answer the following questions to find out:

• Which applications are currently in use?

• What applications do you expect your organization will introduce in the future?

• What is your budget or expected cost?

• What growth do you expect your network will see over the next five years in terms of data transferred and number of users?

• What is the cost of reinstalling a new network that can handle future speeds?

Cat6, Cat6a, or Cat 7 standard Ethernet designs for cabling can be used with 10GBASE-T copper cabling to maximize the use of existing copper structure cabling. To strike the right balance between performance and cost, Cat6a is the cable of choice for 10GBASE-T Ethernet in Cat6, Cat6a, and Cat 7. In the long run, Cat6a is seen as ideal as it is seen as a future-proof cable system.